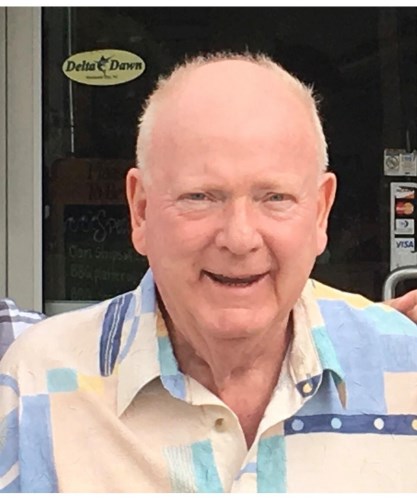 Terry proudly served 20 years in the United States Navy including two tours of duty in Vietnam where he was wounded twice from enemy fire and subsequently awarded the Purple Heart. He began his Navy career an Aviation Ordnance man, became an Explosive Ordnance Disposal Technician, and retired as a Navy Career Counselor Master Chief (NCCM).

Upon retirement he moved to Phoenix, AZ. with his loving wife, Barb, where they established a successful pet grooming business. Deciding to chase a dream, they moved to Pahrump where they treasured their beloved horses and rescued greyhounds on Barb & Terry's Little Ranch (BTLR). Terry established Terry Hand Realty in Pahrump as well as a side business, Cruise One. He also enjoyed the time he served on the Pahrump Regional Planning Commission.

He was preceded in death by his wife and love of his life, Barbara Jean Hand. Left to Cherish his memory are his sister Sally Smith (Woody); his two sons, Shelby Turnage (Laura) and Lucas Turnage; his daughter, Tracey Love (Philip); his granddaughter Melissa Love Gilliam; his grandson, Matthew Love (Ashley); three great-grandchildren, Kaylee, Madison and Chase along with many nieces, nephews, and extended family members.

Fair winds and following seas Master Chief Hand, you are hereby relieved of your duties and can stand down. We have the watch.

At Terry's request, there will be no funeral or memorial service. Instead, he asked that a service be held within our hearts.

To plant trees in memory, please visit our Sympathy Store.
Published by Pahrump Valley Times on Mar. 26, 2021.
MEMORIAL EVENTS
No memorial events are currently scheduled.
To offer your sympathy during this difficult time, you can now have memorial trees planted in a National Forest in memory of your loved one.
GUEST BOOK
0 Entries
Be the first to post a memory or condolences.